Everyone that has smoked a piece of meat has fallen victim to The Stall! All meat with any density and moisture goes through it (brisket, pork shoulder, prime roast, etc

.) and even the most experienced grill masters can become unnerved when their dinner looks like it will never been done because the meat treat on the grill hasn’t moved up a single degree in over an hour, and very little in several hours! The reason this happens has to do with the natural moisture in the meat and evaporation. Trust us, it’s all very natural and if you’d like to do some more reading about it, Dr. Greg Blonder has a more lengthy explanation of why it happens.

But there’s a way to AVOID THE STALL! 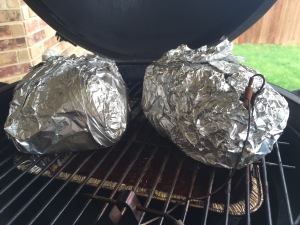 Commonly called the Texas Crutch, it involves tightly wrapping the meat in foil with VERY little holes (one for the probe is all we allow) right when it reaches its stall. It works because it prevents evaporation which lets the meat cool down (just like when you take jog and sweat, it’s the evaporation of sweat that cools you down.) Dr. Blonder has some proof of why it works!

So, if you’re in a hurry, or just want more time to cook other things, wrap your meat tightly in foil, leaving only a single hole for the temperature probe, right as the meat begins to stall.

Let us know if you have used the Texas Crutch before in the comments!